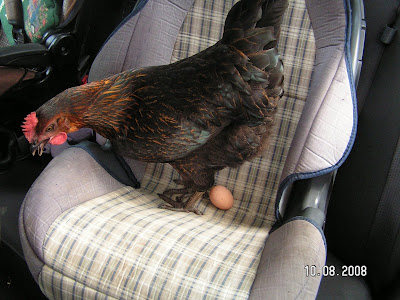 Don't leave your windows down when you come to my house! 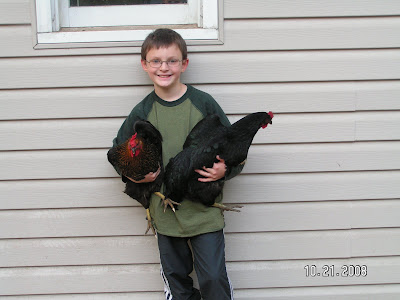 I still don't understand why the chickens like to be carried around. They don't protest, and Noah loves nothing better than to have a chicken under each arm.

And while we're on the subject of creatures with brains the size of peas, I voted a few days ago. I actually considered not voting this year, for the first time since I turned 18. There was no one, save one candidate for state representative, that I felt good supporting. I must confess that the main reason I did vote was out of frustration with our current elected officials. Not one of the senators or representatives here voted against the Wall Street bailout. NOT ONE. So I voted against every incumbent up for re-election. I voted for members of a party that I always said I would never vote for. And I feel good about it- though only marginally, because I know that the ones I voted for are probably no better than the ones I voted against. At least I am not supporting the same liars time after time. Spread the love, ya know.
As for the presidential election, I'm thoroughly discontent with both candidates. There was temptatation to vote third party, but all that does in a two party system is split the vote. If the "liberals" have 3 candidates, the liberal vote is split three ways and the "conservative" wins. If the "conservatives" have 3 candidates, then the conservative vote is split three ways, and the "liberal" candidate wins. Look at what Ross Perot did to the election of 1992. For all the good that voting 3rd party would do, you're just as well off to not vote. I understand voting 3rd party to make a statement, but in reality your vote doesn't matter. You can accomplish the same thing by not voting at all.
Posted by VoiceInTheWilderness at 6:56 AM 3 comments:

Why the kids can't walk through their room... 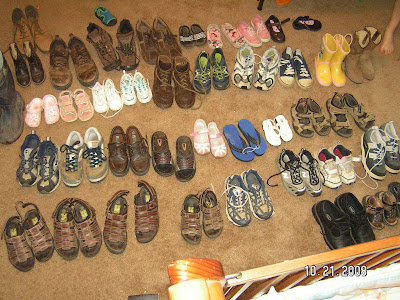 How many children do I have, anyway? There must be some hiding around here somewhere.
I pared the kids down to four pairs each: dress shoes, boots, tennis shoes, and sandals. The only one who didn't want to give away some of her shoes was the girl.
Posted by VoiceInTheWilderness at 6:47 AM 1 comment: 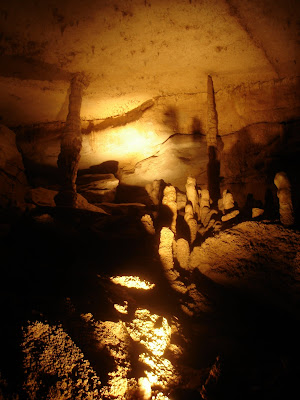