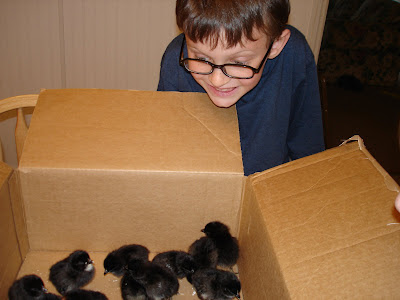 Chicken Independence!
These little ladies have gotten noticeably bigger each day. Aside from a near-death experience the first night, all has been well. Our power was knocked out by a storm, which gave the birds a chill. I was awakened by loud peeping and found them all huddled together in a black fuzzy mass. Scott powered up the generator to run their heat-lamp for the hour or so that we were without electricity.
The kids are enjoying watching them, and so far, no one has complained about having to tend to their needs. 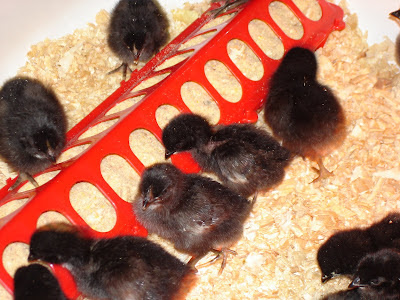 Posted by VoiceInTheWilderness at 2:34 PM 2 comments:

Fuzzy bunnies, Pastel eggs, and other things that have nothing to do with Christ

Well, if you read my post on Santa Clause, you probably already know that we don't exactly do the Easter Bunny thing. For the same or similar reasons as outlined in this post. Don't get me wrong, I grew up a firm believer in Santa, the Easter Bunny, and the Tooth Fairy. At my house, we had a fairy for everything. It was only after my second birth and subsequent studies of the Scriptures that these things really started to seem blasphemous. Blasphemy, that's a strong word, I know. But it does mean "to bring dishonor to God", and I think the definition fits. I've seen some churches try to keep or to make Easter about the resurrection of Christ. They may call them "Resurrection eggs" but I tend to think that's about as honorable as putting a big pink bunny on the cross in the sanctuary. I decided to study this whole Easter thing to try to find out how it started and how we managed to screw it up and turn it into whatever this is that we have now. Here's what I found:

The word "Easter" is only mentioned once in the Bible. It is found in Acts chapter 12. It is translated from the word "Pascha", which everywhere else in the Bible is translated "Passover." That made me think, "Why a different translation in this one place?" I can't exactly ask King James, but there's a pretty decent argument that it was sort of a nod toward the Roman Catholic Church. They had absorbed quite a few pagans into the church, who still really liked to celebrate the pagan feasts, not least of which was a feast celebrating the fertility goddess Ishtar. And you thought it was just a bad movie from the eighties.

So back to Ishtar... that explains the fuzzy bunny and pastel eggs, for those were symbols of the goddess of fertility, sexual love, and war. Monty Python was right, bunnies are evil. Just so we don't confuse things, I'm going to refer to Christ's resurrection as the Ultimate Passover.

Now here's a funny thing: if you study the Passover you are going to be blessed with foreshadowing and the rich history behind this feast. The symbolism of the lamb, the blood, and etc. that was all throughout the Old Testament was a shadow of what God was going to do with his own son. If you've read much of the New Testament, you know about the Lord's Supper (Communion), right? For years it didn't dawn on me that this was a Passover supper.

Here's something else I find interesting: At what point did Christ announce that "his time" was at hand? It was when the Greeks (Gentiles) were among the Jews who had come to Jerusalem to celebrate the Passover. The Greeks were seeking Jesus while the Jews were cooking up their own lamb. That just blows my mind. Read your Bible; check it out. Jesus kept the Passover. Paul kept the Passover. Early Christians, both Jews and Gentiles, kept the Passover. Why shouldn't we? I'm not saying we have to sacrifice an unblemished lamb- the ultimate sacrifice was made through the Ultimate Passover. Call it what you want- Passover or Lord's Supper- we're going to have us a nice meal on April 19th. And what we do will be in remembrance of Him.
Posted by VoiceInTheWilderness at 11:40 PM 4 comments:

I have a natural distrust of "dynamic" personalities. Really, I do. I don't trust anyone with any amount of charisma. I also don't trust women in pantsuits. Okay, I'm joking about that one (kind of).
I have never taken part in a Beth Moore bible study group and I don't plan to change that. Many women think that she is the pinnacle of holiness- "If I only I could be more like Beth Moore..." I've been invited to many and always politely claimed inability to make it to the meeting- which is completely true. That, however is not the main reason I say no. I don't attend because I study the Scriptures on my own. Just me and the Holy Spirit of God, and oftentimes my husband. We talk about what we've read, we look up Greek words, we sometimes start on one subject and end up somewhere else altogether. I prefer this method to using someone else's thoughts and "points to ponder". When actually taking an active part in a Bible study, I interact more with God. I don't just sit and listen to someone else talk about interacting with God. And one of these days, I'm going to tell someone that when I am asked why I never come to the meetings. For now, I'm just telling you, here in this confidential blog post.

Now that that is out of the way, would anyone be interested in studying the Bible with me? My thought is just that we would read the same parts and compare notes- at least that is how I always start. Then if God leads us in another direction, so be it.

I'm also wondering if anyone has any thoughts on any of the other women who have written books about being a Godly woman.
Posted by VoiceInTheWilderness at 11:09 PM 4 comments: 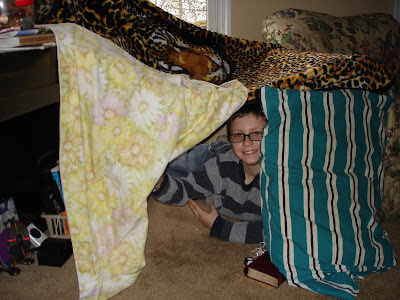 We are finally finished with our school year. Today is the first day of 3 weeks of freedom: freedom from schedules and constant prodding. This is what it looks like.
Today we are expected to have a real, bonafide winter storm! We're sooo excited. Nicholas has prepped the generator (just in case) and we have verified that each child has boots and gloves easily accessible. We thought about going to the grocery store to purchase bread and milk, but it seems a shame to load up and head out into the cold, cold rain.
Posted by VoiceInTheWilderness at 11:02 AM 2 comments: