Open Letter to a Friend

While shopping after church yesterday, I ran into a friend I hadn't seen in a while. In a two minute conversation while my children were pushing my cart into other shoppers, she told me some very disturbing news. Here is what I wish I had been able to say to her. Maybe I'll still get the chance, maybe she'll read it here, or maybe it applies to more people than just her. Maybe some of you will join me in praying for my friend.

Open Letter to a Friend

You are still grieving the unexpected loss of your brother. You are very emotional right now, and you shouldn't be rushing to make any important decisions. When you say that the loss of your brother has pushed you to decide that "life is too short" to waste - via being held back in your worship of God... I don't understand that. I'm sure there is more to the story, but since this is what you've told me.... How about life being too short to completely shatter the foundation of your children's existence? How about life being too short to be selfishly focused on your grief? So focused on your own self, in fact, that others are enduring huge storms because of it, and you say that you know you have made the right decision. You won't be held back anymore, you say. Where is God here? He's not at the center of your life.

Your situation does not meet the biblical requirements for divorce, if what you told me is a true representation of the situation. I don't hesitate to say this because you are a professing Christian. Your husband is, by all appearances, a loving husband. I know him to be a wonderful father. I've often stood in admiration of his relationships with his children. Your daughter, a young woman now, still very much needs the stability of her parents. Most importantly, she needs to see that her mother has a close relationship with God. Instead she is seeing some scary stuff from her parents and I am sure she is having a difficult time reconciling what she's been taught by you with what she sees the two of you doing now.

Here are links to some posts that are the figurative "Meat & Potatoes" of how we've arrived at this place in our lives, since we began to blog.

They include some background, some great things that God has done, and some "thinking out loud" about our own faith. They are in chronological order.

Lately I’ve had many things swirling around in my head. God has taught me some amazing lessons that I desire to share with anyone who cares to listen. The problem is, when I sit down to write about it all, the words don’t come. I write a little, but it comes out sounding like a second-grade essay without the cute-factor. I’ve always loved to write and fancied myself pretty good at it. So why won’t the words come to express what is in my heart?

Perhaps I have become prideful of my writing. Is this God’s work- humbling me through my ineloquence? It is definitely humbling to produce poorly written blog posts that seem to completely miss the messages that I am trying to convey.

Or could it be that the things I wish to write simply shouldn’t be written? I pray about what to say on this blog. So when the words don’t come, is it that God doesn’t want me to say what I want to say? Should I pray for new direction?
Posted by VoiceInTheWilderness at 3:35 PM 2 comments: 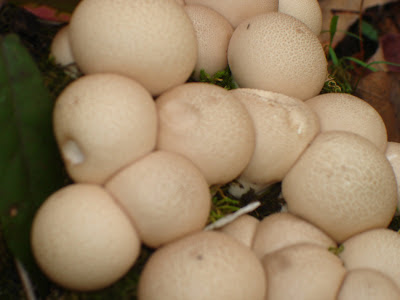 1Ch 16:8-10 Give thanks unto the LORD, call upon his name, make known his deeds among the people. Sing unto him, sing psalms unto him, talk ye of all his wondrous works. Glory ye in his holy name: let the heart of them rejoice that seek the LORD.
This Thanksgiving, the holiday was less about my forefathers in this land and more about giving thanks to my Father in heaven. I used to dread the time when we would go around the table and say what we were thankful for, but this year, my heart was so full of things to be thankful for that I kind of looked forward to it. And you know what? No one asked.
God has done wondrous works in my heart. His love overflows me. '
What are you thankful for?


Posted by VoiceInTheWilderness at 4:37 AM 2 comments:

Is It This Simple?

You have to read this.
Posted by VoiceInTheWilderness at 10:55 PM No comments:

The Glory that Will Be

Last year, Scott attended the "Empower Me Christmas Camp" alone. This year, I was able to go with him. We also took with us 5 kids from our youth group and 3 adults from our church. To read about last year's visit, click here.


Since this was my first time to volunteer, I wasn't quite sure what to expect. I really hadn't put much thought into how I would interact with the kids. Once they started coming in the door, I became a little worried about how to treat them. I was concerned that I would talk down to them or try to help them too much. The group of kids that I stayed with were older than I was expecting... I was kind of thinking 5-9 years old, but instead we had teenagers and young adults- the same age that we brought along with us from our youth group.


I found that I did not for one minute pity any of these children. Some children were dropped off by their siblings who had no disabilities. Looking at them side-by-side, God did not allow me to be depressed over what could have been. Instead, He showed me the glory of what WILL be. In God's kingdom, all infirmities will be gone. "In You, where the hungry feast at the table- the blind frozen by colors in view. The lame will dance, will dance for they are able, and the weary find rest in You."
Posted by VoiceInTheWilderness at 10:14 PM 1 comment:

We find it interesting that sometimes God will give us glimpses of His plan (sometimes just enough to confirm that there IS a plan) through strange circumstances and unusual meetings with folks... the things that some would call coincidences, but we know better.
For example...
Two different goat farms that we were invited to see. They are run by people that we seem to share theology with.
Two different families encouraging our 4H adventure.
Two women named J_____ that we met today.
Two families, one we met today & another we met a year ago 700 miles away, who know each other as a result of shared mission work in a tiny country in the middle east.
It's like the Lord leads us in a direction and then immediately reinforces that by giving us a couple of well-placed encouragers. I am beginning to look forward to these "random" meetings with folks we don't really know. I know that God has a reason for crossing our paths.
On a separate note, we're contemplating or struck by how some people confuse "standard of living" with "quality of living." We heard a person discussing a trip to a foreign country and how sad the people were, and how poor they were, because they didn't have certain amenities that we enjoy in the United States. However, so many of us enjoy them at the expense of time with our children and families. Who has the higher standard of living? Someone with electricity and big screen satellite HDTV on which they can watch nature shows depicting God's Creation in breath-taking resolution and color, or people who step out of a paid-for familiar home and are too busy observing God's glory to turn on a TV if they had one. I know that there are probably some who think this is just self-loathing or "white guilt", but really, we as a society have so much to be so miserable.
Scott says that people who read blogs really want to see pictures, so here is one of a critter we found on the front porch. 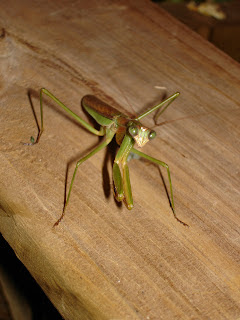 Posted by VoiceInTheWilderness at 9:55 PM 3 comments: 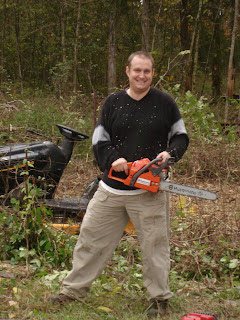 There's nothing quite as much fun as heading outside and felling small trees.

Posted by VoiceInTheWilderness at 1:23 PM 6 comments:

3 visits to the pediatrician.

The first time, Elijah had chicken pox. It was a mild case due to the vaccination that he received.

Then Gloria had an ear infection. She took her last dose of antibiotics today.

Today Elijah has bronchitis and maybe walking pneumonia. We've started antibiotics. If there isn't a significant improvement in the next 48 hours, I am supposed to bring him back.

We'll be hanging out at home for a while to give everyone a chance to recover. My hope is that we didn't pick up some new germ while at the doctor's office. (sigh) We'll probably know that in 48 hours, too.
Posted by VoiceInTheWilderness at 1:04 PM 1 comment: