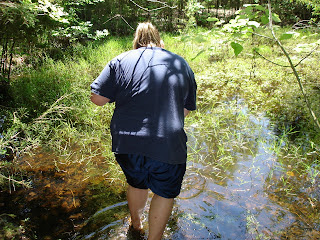 Here is a picture of one of our brave youth wading into our pond. Upon wading in, she proclaimed, "Brother Scott, this smells like doo-doo." We have video of her falling in this and maybe someday (after we've secured the appropriate legal releases!) we'll post it.
While we are on the subject of our youth, this Wednesday something amazing happened. We usually feed the youth, before we have a lesson. The rule has been that if you eat my food, you listen to my lesson. Sometimes I had to conduct the lesson loudly while dodging flying hotdogs. It was never "easy". Fortunately, I got some advice from a veteran of the big tent revivals. He suggested that I let them eat and run. If they don't want to stay, don't make them? It sounded foreign, but kind of Christ-like all at the same time. So, the week before last, I fed them and then told them that anyone who wanted to go outside and play basketball or "hang out" was welcome to. I had to explain what "hang out" meant, because I don't think that is what they call it now. However, as soon as they figured out that I was letting them leave without paying...so to speak....about 50 youth rampaged past me and out the door. One girl left so fast that it was like watching the road runner. One second she was standing in front of me and the next minute.....poof.....cloud of smoke!
I was kind of disappointed, but I was glad that about half a dozen youth remained in the room. The lesson that night was quiet and we were able to speak at a reasonable volume. I have to say that I enjoyed it, but I still felt bad that so many had rejected it.
We ended the evening in prayer for those who left that they would hear God's calling in such a way that they could not resist it.
Last Wednesday, I pursued the same game plan. I believed that we would have a few more remain in attendance for the lesson than the previous week, just because a few of them mentioned that they felt kind of guilty for leaving.
I fed them and made the "ya'll can leave" announcement. Quickly, I got out of the way of the door. No one stood. I said again that anyone who did not want to stay in for the lesson could leave. Several people jumped up this time and looked around the room. They wanted to leave, but they wanted to take some more people with them. They literally tried pulling youth out of seats. It didn't work. Only about half a dozen of the youth left. Wow! I was not prepared for that. The lesson went well and they were very well behaved and quiet. It was nice to see so many youth respond to God's calling, the conviction of the Holy Spirit, and to resist the temptation and negative influence of their peers.
Posted by VoiceInTheWilderness at 10:31 PM