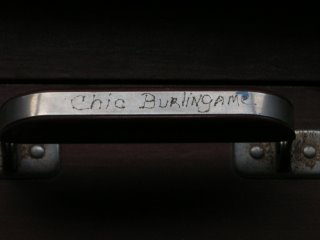 I know that God is faithful, even when we doubt His very existence. When we have the audacity to, having seen, touched, and tasted the wonders of this world which He created, still desire to probe His wounds, He remains faithful.

Too many times we attribute amazing works in our lives to "coincidence". I am ashamed to say that I am guilty of this. When my faith has been weakest, I seem most willing to excuse amazing examples of God's perfect plan at work. During one of these particularly weak times and shortly after my recent medical troubles, a family friend prayed with me that I would experience something so impressive in my life, that I could not simply attribute it to "coincidence".

I had all but forgotten that prayer, in the midst of our getting rid of property and preparing our home to sell. Then, one rather unimpressive item we had decided to get rid of would come to symbolize God's faithfulness to another family, and to ours, by using us as a vessel.

One of the items that we were disposing of was a trumpet. I had purchased it some years before at a thrift store or yard sale. I couldn’t remember which or exactly when. We had it for several years. I had given it to one of my sons. He and his brothers occasionally spit and coughed into it in attempts to make sound. My wife and I wanted to donate it to a thrift store, because we didn’t really feel that it was worth the effort to put on E-bay. My son would have none of that. He insisted that we attempt to sell his prize trumpet. However, the several times when we attempted to list the trumpet, he could not produce all of the parts required to make it work. It seemed we were always missing a mouthpiece or some other integral part of the horn. One day in late August, we found everything and listed the trumpet and case on E-bay. My son was quite pleased.

A couple of days into the auction, we received an e-mail from a potential buyer asking us if there was any identification on the trumpet or case. Oddly enough, we had never even looked at it that closely. Upon close inspection, we saw that the name “Chic Burlingame” was carefully scratched into the handle of the case. My wife and I wondered if Chic might have been a famous jazz musician. I performed an Internet search for his name and learned that Chic was not a famous jazz musician, but he was quite an amazing trumpeter, nonetheless. 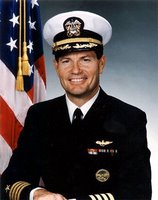 I learned that Charles “Chic” Burlingame was the son of two military parents. He and his brothers and sister were brought up in a loving and supportive home. His mother encouraged a love of music and dictated that each child learned to play an instrument. Chic selected this trumpet. He practiced it every day, while he was learning to play. His sister, from the other side of a bedroom wall, could testify to his dedication to learn this instrument. On Sundays, Chic would strap this trumpet in its case to the back of his bicycle and ride with it to church, where he played in the band. Chic played the trumped in the High School band with his younger brother. Chic went on to play the trumpet at the United States Naval Academy, where he attended college.

In addition to his love of music, he had a love of aviation from an early age. At the age of six, he fashioned a model airplane from scraps of wood. On the wings, he wrote the letters “U.S.A”. Chic, with his trumpet in hand, eventually went on to graduate from the United States Naval Academy. He was known as a gifted pilot. He flew F4 “Phantom” fighter jets from the U.S.S. Saratoga aircraft carrier. He served several tours at and was an honor graduate of the Navy’s elite “Top Gun” school in Miramar, California. He remained in the Naval Reserve, even after became a pilot in the private sector.

Chic was definitely a great American success story and an example of exemplary character. We were proud to learn that we had found the beloved trumpet of his youth. The more we learned about Chic, the more we were inspired.

We learned that, during his time at the Naval Academy, Chic played the trumpet with a man named Frank Culbertson. Frank was also a gifted aviator. He went on to become an astronaut. Frank Culbertson observed the events of September 11, 2001, from his position as the Commander of the International Space Station. He, with his trumpet, was the lone American in space that day.

Frank Culbertson watched the smoke rising after the attacks on his homeland. He did not know, at that time, that his classmate and fellow trumpeter was the Captain of American Airlines Flight 77, which had been hi-jacked and flown into the Pentagon earlier that morning.

After learning of Chic’s death, Frank memorialized him and the thirteen other Naval Academy graduates who lost their lives during the attacks on September 11, 2001 in a special broadcast from space. It concluded with Frank playing “Taps” on his trumpet. Frank later commented how differently tears flow in space.

We ended our auction of the trumpet. 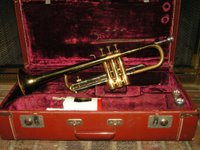 Posted by VoiceInTheWilderness at 7:16 PM

Wow! What an amazing blessing! Thanks for sharing this story!

How amazing to have a piece of history at your fingertips and the story that goes with it.

What did you do with the trumpet? Did you donate it to a memorial or his family?

We've always intended to write part 2 of this story. The short answer to what happened is that it was returned to the widow.