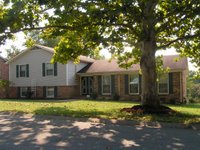 In one week, we were accused of child abuse by a lunatic neighbor and investigated by the Department of Childrens' Services, Scott's position at work was eliminated, and a minor sinus infection turned into several doctor's visits, an E.R. visit, and resulting general questions about faith and purpose.

That week we were "knocked off of our donkey", so to speak. It was a blessing.

We prayed for guidance and reaffirmation of the faithfulness of God. Some people say you have to be careful what you pray for. It became clear to us that God was calling us to get rid of these things which were consuming our time and financial resources. We decided to give away or sell almost everything we owned. That included our 4 bedroom house in the suburbs. We didn't know exactly where we were going to move. Then, as providence would have it, we found an unadvertised motorhome for sale priced $8,000 under its wholesale value. It would fit our crew and provide us the mobility to travel where He would call us. No more would we be tethered to our spiritually, emotionally, and physically suffocating "American dream."

By faith, but not without much criticism, we would make this move.
Posted by VoiceInTheWilderness at 10:59 PM

And we wish you all the best too!

We also live in a 5th wheel trailer as a family with 3 little girls. I feel like most people feel sorry for us at first, but I feel we have many blessings and don't feel sorry for ourselves.