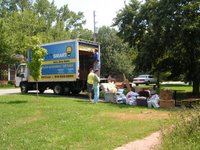 To say that we were "packrats" would be an understatement. We had a 400 square foot rec. room and a two car garage that you could barely navigate through. At one time, we owned a light bar from a police car, at least half a dozen army cots, and a large collection of electrical and mechanical parts from dozens of small home appliances that we had taken apart over the years. Our friends were always amazed that, when someone mentioned renting some tool or toy, we usually had one or two. We had enough camping equipment that we could literally outfit a cub scout pack. The items that were of value that we donated to local charities ended up filling five moving trucks. It was cathartic as we watched the trucks pull away time after time.
Posted by VoiceInTheWilderness at 9:41 PM

What a great blog! I will enjoy reading more about your travels and how you got where you are now. I can't believe your possessions filled 5 moving trucks! I read longingly about your army cots. We don't have beds although the kids do trade off on two army cots. We could use one more. ;)

I have been blessed through "knowing" you on the internet and I will continue to pray for God's leading for your family.