There is a picture on our fridge of Noah’s (my 10 year old) close friend Eli that makes me smile.

The two of them hit it off quite well since the first time they met. That is except for the first few minutes or so that we introduced them. Apparently, we had not fully explained to Noah that Eli’s Cerebral Palsy was not, in fact, a contagious disorder. As soon as we set the record straight, the two of them were pretty much inseparable when Eli visited.

In addition to a shared love for a certain character named Sponge Bob Square Pants, they both had the same sense of humor. I delighted in entertaining them with spontaneous songs about subjects that only a young boy would find humorous, much to my wife’s dismay. They were a great audience and their continual giggles and snorts only encouraged me.

It was so strange to see how Noah could carry on a conversation with Eli, who could not speak, as if there were nothing at all unusual about it. Eli’s random arm movements, radiant smile, and infectious laugh were a sort of language that they both understood.

If Noah was not standing up doing the dancing and running for them both, he was next to Eli’s chair in deep conversation or vacant observation of the guy who “lives in a pineapple under the sea”. It was one of these times that it struck me how much they looked alike, despite their obvious physical differences.

Noah, who sometimes does not make friends easily, had made an extraordinary one in Eli. He learned that a person’s value is not in their physical ability or lack thereof. He learned that “special” kids are still kids like him.

Unfortunately, Eli’s Dad had to move to another state and take Eli with him. Noah was sad, but always looked forward to hearing an update on his old chum. Noah is, if nothing else, a loyal friend. He appreciated a new picture of Eli having a birthday or just chilling out with some Sponge Bob.

Noah’s prayers always included one for Eli that God make him able to run and talk.

Today, through tears, I had to tell Noah that Eli is both running and talking with our Lord and Savior.

While we weep, we do not weep as those who have no hope.

Run In Peace little friend, until we meet again.

Radiant Smile
Posted by VoiceInTheWilderness at 8:08 PM No comments:

I've started thinking about this ole blog recently. I kind of miss posting here. Sure, there's Facebook, but it's just not the same. I will be easing back into posting here over the next few days. Now I just need to figure out how to get pictures from my phone on blogger.
Posted by VoiceInTheWilderness at 9:45 AM No comments:

It has been brought to my attention that I have not updated this blog for many months. Not that I didn't know that already, but the reminder was my call to action. So do I delete, or begin posting again?

This is the question I will be pondering for the next couple of days. Decision-making is not my forte.

Ginny, please check the comments on the last post! :)
Posted by VoiceInTheWilderness at 1:00 PM 2 comments: 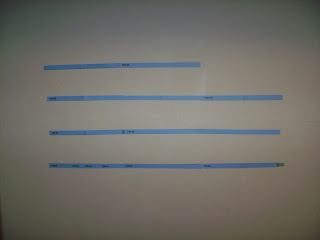 Our "Homeschool in the Woods" timeline... blank for now, but ready to go. 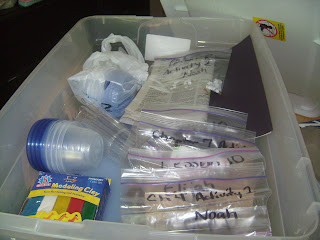 The Science Box- We spent a little bit of time putting together ziploc bags of supplies for each of the activities/experiments we need to do for science. I compiled a list of missing supplies at the same time... no more skipped science activities because we couldn't find the right stuff! 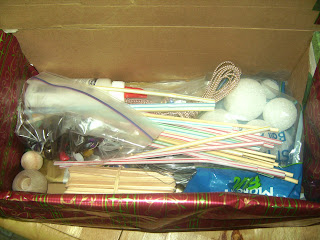 A small, easy to use arts and crafts box
Posted by VoiceInTheWilderness at 1:03 PM 2 comments:

Summertime and the livin' is easy

When I proposed a two week long summer break, followed by "fun" summer school sessions, I was practically boo-ed out of town. So the kids are having their lazy summer vacation. The books have been put away. The school-morning routines will have to be re-learned, for sure. But clearing the cobwebs from their little minds in the fall just may not be necessary.

We've all been working on our Spanish. Nicholas is using typing software to learn how to type instead of peck, totally of his own accord. Noah is learning to play the melody to Greensleeves on his mandolin, even though his teacher is AWOL. Elijah is gaining proficiency in counting money through playing a Reader Rabbit computer game.

Nicholas spent several hours one day measuring and drawing to scale the layout of our home, including immovable furniture (the piano and woodstove). All other furniture was measured and added to the layout with tagboard pieces. His motivation? It looked like fun, and the next time I want to rearrange the furniture, it will save him from making unnecessary moves- since he's usually the muscle behind my madness. You can see a miniature version of his floorplan in this photo. 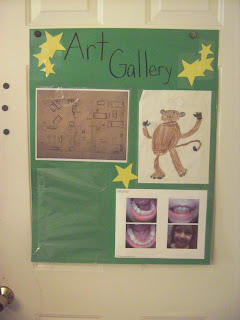 We also realized that we can use magnets on our metal doors to hold up posters instead of using pushpins and making holes in all the walls. We've lived here for over 2 years, and I just now thought of that. Sometimes I am slow.

In preparation for learning American history next school year, we have purchased the Liberty's Kids videos. My children have been absorbed in the story of the American Revolution since, and their play reflects it. During the episode about Thomas Paine's Common Sense, Noah looked at me and asked, "Mom, is that the same Thomas Paine who was a deist?" Me: "Ummm... (consult Google)... Yes! How did you know that?" It's amazing the things they learn from The Sugar Creek Gang (the everynight bedtime story). 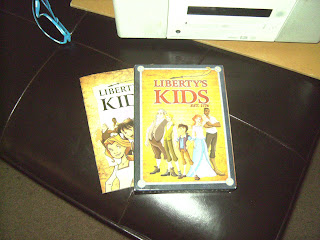 The children also tried writing their own invisible messages after watching Liberty's kids. I found the results the next day... 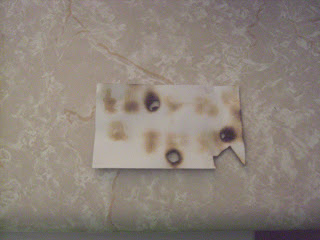 There was also a sticky spot on the floor where someone spilled the lemon juice and neglected to clean it up. They are still kids, of course.
I've kept myself busy making teaching aids. We've laminated fish for alphabet fishing, and made these lighthouse cards to use with math. Our first Konos lesson deals with lighthouses, so these shapes (purchased at the Dollar Tree!!!) will make for a fun way to tie math into that. I've also gotten a jump on making some necessary posters for science. 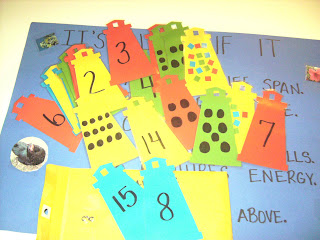 Painting is always a fun activity. I watch for discounted painting supplies when I'm out and about. These canvases were half-price at Hobby Lobby, and made for a good 1 1/2 hour project today with the outside temperatures in the 90s. 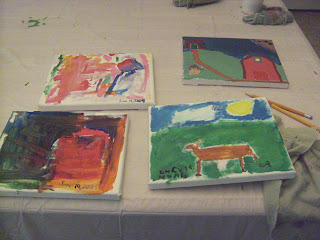 Posted by VoiceInTheWilderness at 11:15 AM 7 comments: 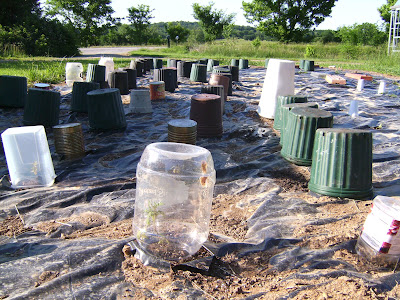 Glad to have a few extra pots, #10 cans, styrofoam cups, and empty pretzel containers on hand. *sigh*
Posted by VoiceInTheWilderness at 5:06 PM 1 comment:

or "A Tale of Two Roosters" 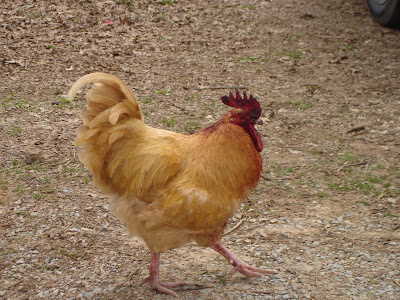 We're not sure who is hurt worse... but we do have our favorite. The rooster above is very sweet and loving toward one particular hen. They stay together all the time, she picks his feet clean, and if someone approaches her, she squats down and scoots herself underneath him. Love.
Posted by VoiceInTheWilderness at 2:34 PM 4 comments: